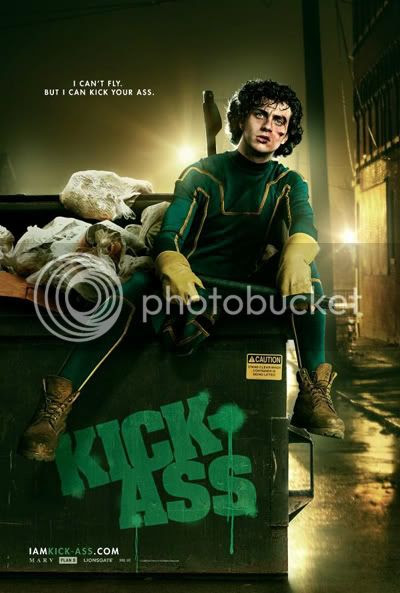 Superhero movies have ruled the box-office for the last decade. The X-Men, Spider Man, the Incredible Hulk and Iron Man have all become integral parts of popular culture, migrating to Hollywood from the relatively enclosed world of the comic-book. Kick Ass then, with its focus on the potential for 'real' super-heroes in a world governed by silence and complicity, is best described as timely.

Pop culture references abound. ‘Youtube’ and ‘MySpace’ (now I’ve thought about it, who uses MySpace anymore? Maybe the script was written before the Facebook explosion) play integral roles in the narrative, and in a great self-referential moment the hero of the film, unapologetic geek Dave Lizewski (played with a pitch-perfect accent by Aaron Johnson), learns that his crime-fighting exploits are to be adapted into a comic book (the film itself is adapted from Mark Millar’s comic book series of the same name).

The story of Kick Ass is simple, which is probably why it’s so appealing. Dave Lizewski is a nerdy, comic-book fixated teen, struggling to deal with his burgeoning interest in the opposite sex as well as the thugs who regularly snatch his lunch money. One day, he asks himself a question; why has no one has ever tried to be a superhero? He decides to take things to in his own hands, ordering a cut-price diving suit and heading out to fight crime as the eponymous Kick Ass. By the end of his first mission, he has been knifed in the stomach - not a great way to start a career.

Dave’s next mission is more successful, and footage of him literally ‘kicking ass’ goes viral, attracting millions of viewers worldwide. It soon emerges that Dave isn’t the only super-hero in town. Ex-cop Big Daddy (Nicholas Cage, doing a great Adam West impression) and his eleven year old daughter Mindy (alias Hit Girl) have an armoury that looks like it belongs in a government bunker, and more fighting prowess than characters you see in 18-rated video games. To watch an eleven year old girl sprinting along walls and performing back-flips is extraordinary, especially when you consider that the said eleven year old is also slicing peoples’ legs off. 'Big Daddy' is taking his revenge on crime-lord Frank D’Amico (Mark Strong) for setting him up for drug possession before his daughter was born, systematically wiping out swathes of his thugs. 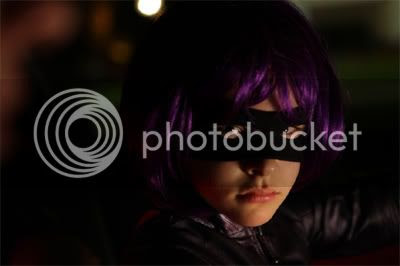 Some of the best moments in the film are the most taboo. Hit Girl (Chloe Moretz) is clearly the stand out character here, a cyclone of killing prowess who takes out six knife-wielding junkies without breaking a sweat. The sheer wrongness of this situation isn’t ignored, and in some senses Mindy is a normal kid. When her father takes her to a stretch of concrete wasteland to introduce her to the sensation of being struck down by a bullet, she whines for a trip to the bowling alley and a bowl of ice-cream. She is simultaneously a ruthless killer and a whiny little girl. Now I look back on it, it’s quite unsettling to think how delighted I was to watch her cut down a ware-house full of criminals.

Kick Ass is a marvellous film, consistently funny and heart-felt in the right places. Although its opening sequence would seem to indicate it’s a ‘realistic’ attempt to portray a super-hero, it’s just as absurd as most other comic-book films. At points it came across as pure wish-fulfilment (case in point, an overweight, smug geek pal of Dave’s getting a spontaneous kiss from one of the hot girls at school), but that doesn’t matter. If anyone goes into Kick Ass expecting a documentary or a lesson on ethics, they will be sorely disappointed. However, if you want a film that will have you smiling from beginning to end, book your ticket now.
Posted by Rachael at 09:13