Black Narcissus: The Edge of Darkness 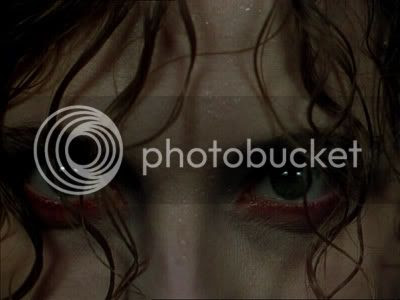 The Cabinet of Dr. Caligari (1919) pioneered the use of expressionistic scenery that mirrored the fractured mental state of its central character, and Black Narcissus uses similarly stylized scenery in order to convey a sense of disorder and alienation. However, while Caligari’s scenery is bizarre from the offset, Black Narcissus accumulates strangeness as it progresses. While the Nun’s faces are lit clearly at the start of the film, they are soon transformed into canvases for sharp, criss-crossed shadows that emphasis their entrapment.

The story is simple. A group of Nuns are sent to India to create a new mission in an abandoned palace, only to find themselves altered by their immersion in a strange, unfamiliar culture.

It is clear these women are thoroughly human from the offset. At the start of the film, a group of Nuns are seen giggling like a group of gossiping schoolgirls. The torrid wilderness they enter does not transform them into strangers, it is merely the trigger that sends their insecurities bubbling to the surface. 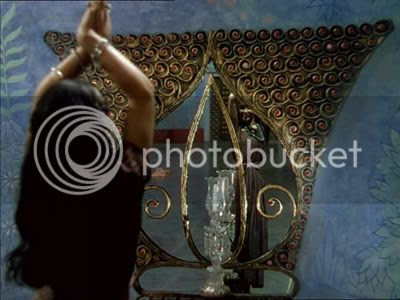 Light and shadow are not the only filmic techniques used to create the impression that the nuns are trapped. Their vast, white habits quickly become absurd when seen beside the fluid, form-fitting saris of the local women. Kanchi (Jean Simmons), a young girl who is admitted to the convent in an attempt to correct her behaviour, embodies this contrast. While the Nuns express themselves through spiky looks and stiff, functional conversations, Kanchi expresses herself through dance. Her body is uncontained, and she revels in her fluidity as she dances alone before a mirror.

The life led by the nuns in Black Narcissus is meant to be one of complete self-denial. Rather than living within the safe walls of a convent, these nuns are supposed to improve the ‘uncivilised’ communities they enter by introducing health-care and education. Rather than benefiting the communities they enter, the nuns alienate the people who come to them for help by viewing the Indians as irredeemably ‘other’ to the norms of white, European Christianity they uphold. “They all look the same to me,” sneers one of the Sisters after entering the community.

It would be naive to consider Black Narcissus as a defiant condemnation of colonial attitudes. Being a product of the post-war era, it is as much a justification of colonial views as a condemnation of them. The Indians are, for the most part, depicted as a homogenous unit, characterized by childishness and simplicity. While the Nuns are afflicted by intense personal turmoil, the Indian characters follow more conventional narrative paths. The troubled Kanchi is paired with an unnamed Young General (Sabu), the latter of whom compares their relationship to that between the storybook figures of the “Prince and the Beggarmaid.” These characters are contradictory: alien on account of their dark skin and foreign customs, yet paragons of reason when compared to the strained Sisters of the convent.

Sister Clodagh (Deborah Kerr) is the central character, the unusually young Mother Superior of the remote convent. Kerr gives a remarkable performance, the minute twitches of her strained face conveying intense internal activity. A series of flashbacks occur during the scenes where Sister Clodagh is praying in Chapel. They hark back to a bright, happy youth typified by the freedom and excess that are absent from her life as a Nun. A dissolve from a shot of her smiling as a young, carefree girl to one of her smiling as a praying Nun indicates the power of these memories to soothe, emphasizing the foolishness of denying the pleasures they contain.

Her fellow Nun, Sister Ruth (Kathleen Byron), is eminently unsuitable for life in a convent. When not spying jealously on Sister Clodagh’s developing relationship with the eminently unholy Mr. Dean (David Farrar), she is terrorizing bemused schoolchildren. 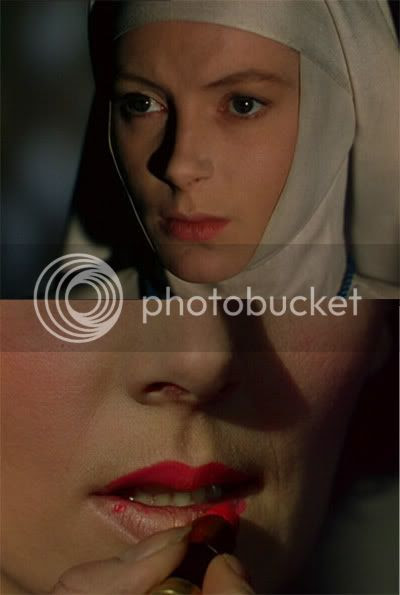 This instability reaches fever point at the climax of the film, and in a truly marvellous scene Sisters Ruth and Clodagh face-off against one another. They sit on opposite ends of a table, Ruth dressed in a tight, fashionable dress and Clodagh in her starched, overwhelming Nun’s habit. While Ruth sensually applies lipstick to her face, Clodagh peers down nervously at her copy of the Bible. Despite the seeming oppositions between them, Ruth is what Sister Clodagh has the potential to become. Both are drawn to the same objects of desire – memories of their material lives and the licentious Mr. Dean – and the only difference between them is the fact that Sister Ruth gives herself over to them fully.

Neither woman chose life in a convent for the right reasons, treating it as a place where they could merely block out past traumas rather than work through them. Clodagh merely has the better facade, for the flashbacks to her past life illustrate that her old lifestyle continues to hold allure.

Black Narcissus is very much a film of spaces, and the last scenes of the Sisters slowly winding their way through the jungle on the backs of miniature ponies is highly telling. It begins to pour with rain moments before the film ends, generating the impression that the heat of the sensual Indian landscape is finally being extinguished. 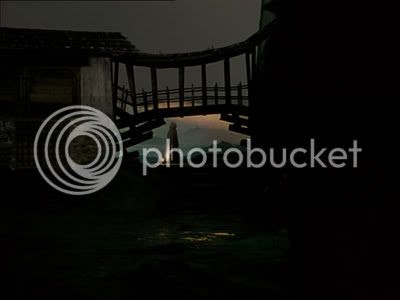 Jack Cardiff’s cinematography is stunning, and Black Narcissus is worth viewing for the images it offers if for nothing else. Its psychological complexity is mirrored in the careful gradations of its scenery, and his Oscar for the film was richly deserved.

The friend I watched this with was distracted by the clipped voices of the Nuns and the blatant artificiality of the scenery. To view it in this way somewhat misses the point. It is not true to reality in the way that a photograph of a mountain or a river is, instead it is a sutiably unstable, heightened embodiment of the emotional states of the film's characters.
Posted by Rachael at 03:58